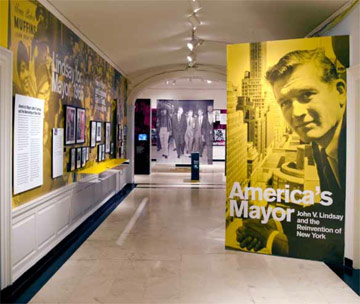 Three decades before Rudolph Giuliani was dubbed “America’s Mayor,” John V. Lindsay was, for a time, the urban leader to whom the whole nation looked. Young, energetic, and idealistic, he campaigned on a platform of change and optimism. Lindsay’s agenda included many of the signature liberal policies of the day—support for civil rights, the war on poverty, mobilization of the power of government to build a better society. Even more, he envisioned a new kind of city life, asserting that the American future depended on sustaining urban ideals of diversity, density, and creativity.

Eight years later, many thought that dream was dead. After almost losing his reelection bid in 1969, after a failed Presidential run in 1972, after a series of paralyzing strikes, after years of rising budgets that outstripped the city's resources, after growing polarization within the city, after a series of indisputable missteps but also striking successes in advancing a new vision of city life—and in keeping calm in New York when other cities went up in flames—Lindsay’s record was deeply disputed. He was a hero to anti-war activists and had gained the trust of many in the black and Latino communities, but he also left a city in many ways worse than he had found it—dirtier, more divided, more crime-ridden, and nearly broke. Observers disagreed as to whether these changes happened because of Lindsay or in spite of him. His mayoralty became a Rorschach test for those who were debating the viability of urban activism itself.

The “Lindsay years” corresponded almost precisely with the height of the national tumult over the Vietnam War, civil rights, liberation politics, and the counterculture, and John Lindsay became a protagonist in many of these dramas. But even more, behind those dynamics were fundamental questions about what kind of city New York was becoming and what it would take to govern it. John Lindsay was mayor of a city experiencing the birth pangs of a new era—a post-industrial, multiracial, post-Tammany Hall New York, one in which political alignments were volatile, in which expectations were growing and resources shrinking, in which people were vying to influence what the city would be. Whether that city could be reshaped by political ideals and reinvented by government was the defining question of the day.